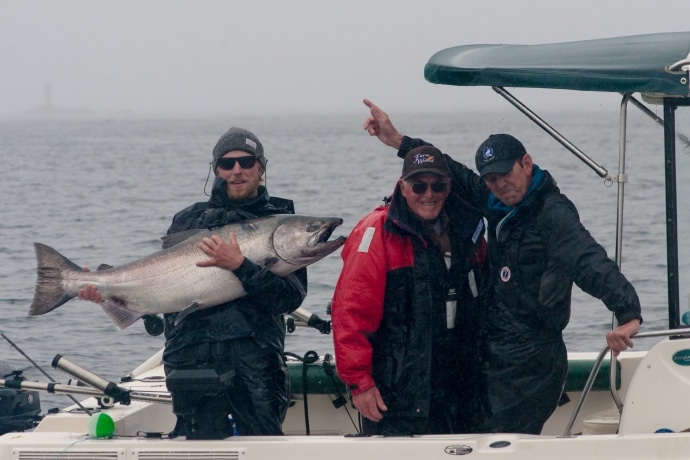 Arrival of the Hogs

Wow. What a trip.

Just a few days ago I was sitting down with lodge owner Georgia Husby as she reiterated the positive effect that the recent north-westerly winds will have on our fishing grounds. The wind brings colder, bait packed water down from Alaska, which as you may expect, is filled with salmon. “The big ones will come soon” she told me, and she could not have been more right!

Hali fishing has shown no signs of slowing down. Many guests took home large fillets with them when they left, but the largest one of all was released back to our fishing grounds. Veteran guide Rick brought his guests offshore from Shag Rock where another guide, Zoner, just had a monster bite that actually cracked his rod holder. Shortly after arriving they battled a 183cm Halibut to the surface in order to take some measurements, admire the monster, and let it swim freely back to the depths just offshore from Shag Rock. “It was one of the largest I’ve ever seen in person,” said Rick, who also landed a 52 last week.

When it comes to salmon we had many Chinook in the mid-to-high twenty-pound range that were found all over our expansive fishing grounds. Multiple Tyee were also landed throughout the four days including a 35 from Green Point and a 32 from Parker, both on the third day of the trip. 9 year Peregrine fishing guide Dan helped his guests finish in style, releasing a beautiful 34lb from Parker Pt and bringing back a 25 for the weigh in celebrations on day four.

Out of all the gorgeous fish this week none were better than the hog reeled in by Hal, Earl, Elaine, and their guide Sam. They hooked a gigantic 55lb Chinook at Eagle Rock on the far west end of our fishing grounds. The moment Sam called me over the radio I knew it was a good one based on the excitement/distress in is voice. Upon arriving I immediately got a good look at the fish as it flipped 5ft into the air between our two boats.

“Sam looked at us after the first cartwheel and warned us this could be an hour long battle” recalled Hal. His estimate ended up being conservative; the fish was landed an astonishing 3 hours later, a few kilometers away just offshore from Snake Rock. At age 85 Earl K. caught the fish of a lifetime, and had this to say about it: “Hal would hold the rod up while I reeled, and then I would do the same for him when it was his turn. We were both exhausted. There were moments when we would run out of steam but Sam was great, he was very determined and kept motivating us to get it in. It is an experience we will never forget.”

As the photographer I had the pleasure of watching the majority of this amazing battle and seeing the enormous Chinook in person. It was incredible to see its size in comparison to Sam as he finally heaved this thing around the corner of his 24ft Trophy for a quick picture. It took three hours to get the Hog into the boat but only seconds for it to be released as it swiftly disappeared back into the Pacific Ocean for some much deserved rest and relaxation. What an experience for everyone involved!

Now’s your chance to reel in a Hog of your own! Call Bruce at 1-800-663-0992 to experience the surreal fishing grounds of Northern Haida Gwaii yourself.