Our eighth trip involved a 2 day fishing derby for the Convoy Group and the biggest Chinook caught was the winner. For the derby our guides were not allowed to cut bait, bait the hooks our handle the rods. The guides piloted the fishing boats and guided the fishermen to the fishing grounds. For all intents and purposes the guests were avid anglers and had serious business to attend to…..and have fun. The Convoy Derby coincided with our 30th anniversary and there was the usual pampering and feasting back at the lodge when not on the water.

Day one came down to the wire. Two fish caught by Landon and Murray were 1/10th of a pound apart in weight. Landon squeaked out the days best with the help of our seasoned guide Steve.

The waters in the Dixon Entrance were calm as could be. Most of the Convoy group were returning guests and they mentioned how they had never seen the water here so calm and flat. The sun shone through partly cloudy skies and as the morning progressed and the tidal change occurred, many boats headed offshore to angle in the rich deep waters. Steve and his guests remained stoic and tacked inshore along the coast.

It was there that Landon had his opportunity and ceased the moment. Steve knew if he stuck it out there might be pay back for their strategy. Landon’s single Chinook was all he caught on day 1. Murray came in close second with his Chinook, and he also took home 3 Coho. Joey, Colin, Dan, Tom, and Burt all caught one Chinook weighing more than 20 pounds. Burt added to his one Chinook with 2 Coho. Chris, Dan, Paul, Scott, Darcy, and Brian all caught and kept a Halibut each, the largest going to Brian at 34.6 pounds.

Day 2 was mostly a repeat of the first day’s weather and seas. Guide Cody’s boat was victorious. Darcy fished hard all day and angled a Chinook that rivalled Landon’s on day 1.

At the dock weigh – in it was a real derby atmosphere. Joey, Landon, Chris, Colin, Stephen, William, Darcy, and James all caught at least one Chinook over 20 pounds. Yasushi caught and kept 3 Coho. Eric caught and kept 4 Coho and also caught and released 3 Coho. Jamie kept 3 Coho and a Sea Bass. Along with the Chinook Joey kept, he released 3 additional Chinook and kept 2 Rock Cod. Stephen won the derby with his catch at 28.6 pounds. Congratulations to Stephen and his guide for day 2, Cody. Great job.

On Day 3 the same rules applied, but it wasn’t as competitive, and as the derby finished the group relaxed and fished for fun and sport. Boats were spread out all over; from Edenshaw to west of Langara Island and out to Halibut Hill. Art and Chris caught and kept a Chinook each weighing over 20 pounds. Chris and Art caught one Coho each on day 3, and for Art, he added to his 2 Coho he caught on day 2. Darren, Joey, Tyrel, Justin, Richard, and Murray both caught and kept 3 Coho. Tom, James, Sean, Derek, and Brad caught and kept 4 Coho each. Sean, James, Brian, Richard, Brian,Stephen, William, Chris, Tyrel, Justin, Darcy, David, and Yasushi brought in Halibut to end their successful fishing trip. Darcy rounded the group out with a retained Ling Cod caught on the last day.

Thank you from all of us at Peregrine Lodge. We are honored to have hosted your fishing derby and hope you enjoyed it as much as we did. Our eighth trip of the season has been a competitive one for our guests this time ’round. We hope your next adventure to Haida Gwaii will bring you back here for another adventure…in a derby or just for fun. We will leave the light on for you. 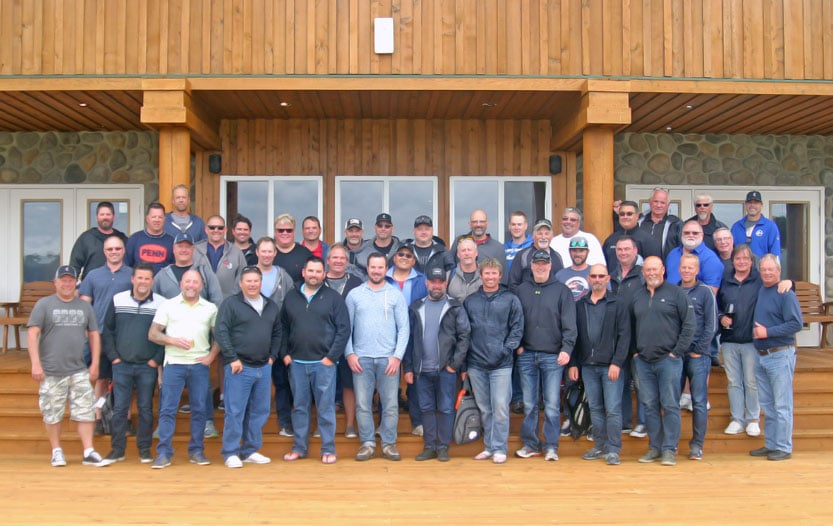