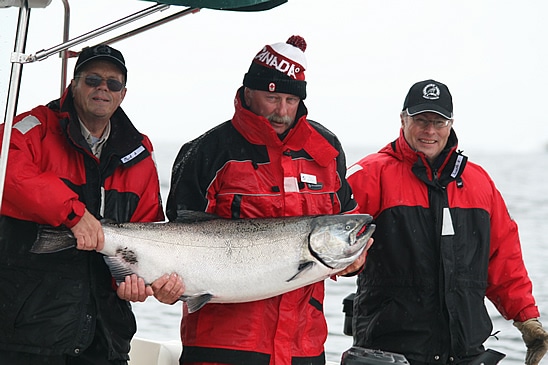 Our guests have seen some of the finest fishing in the Haida Gwaii this past trip. June 28, our guests encountered a drizzling rain throughout the day. Our anglers didn’t pay too much attention to the weather, as the action for most boats was consistent throughout the day. The morning’s low tide proved fruitful for one guest in particular. Just off the East side of Parker, skillfully guided by Bill Murray, Mark Abrams hooked a large Chinook at a shallow depth. This mighty salmon put up a challenging fight for close to an hour. The large Chinook tipped the scales later in the afternoon at a whopping 52 pounds. The Abrams were the newest members of our “Over 50 Pounds Club”.

Dave Uzzell, one of our most senior guides, left the docks at 7:00 AM with his two guests and headed straight to Cape Edenshaw. By 9 o’clock, three tyees weighing in at 47, 37 and 33 pounds were already in their tub. They soon headed to Green Point to catch their limit of Cohoes and out to the Halibut grounds to hook into their Halibuts. They were back at the lodge by noon to enjoy an afternoon in the hot tub and booked appointments with the masseuse. Now that’s great fishing!!
The fishing on day three proved to be stellar. The early morning action was enjoyed by every angler starting with double headers at Snake and Parker Point, two of the most consistent fishing spots in the Haida Gwaii. East Parker proved to be plentiful for Steve Schwartz and John Williams’ guests. Both boats had simultaneous double-headers on their downriggers running from 27 – 41 feet.

The rest of the fleet saw much of the same sort of action throughout the morning at 30 feet and deeper. Allison, our resident photographer was busy all morning taking action shots. At any one moment, there was a feisty Coho or a powerful Chinook being played. With full boxes the guests left later that day ready to regale their family and friends with Peregrine Lodge fish stories.

You’ve got plenty of line and plenty of time – See you soon!