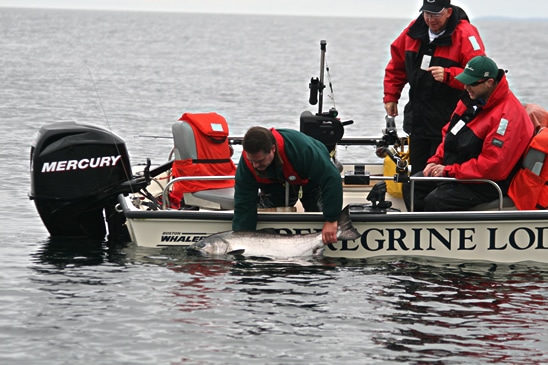 Peregrines’ guest had plenty to celebrate during the Canada Day festivities. Calm waters, sunshine and plenty of action gave way for all. Glen and Annette Fox were seen on the fishing grounds sporting Team Canada hockey jerseys, while some of the guides had Canadian flags and toques. With such fantastic fishing conditions the anglers did not have much time to sit and relax, as there was an overwhelming amount of action on the rods throughout the day

The morning got off to a great start for Jason Wubs. Jason hooked into his first bite of the morning at Snake Rock; the salmon challenged him for a forty-minute fight.

After carefully releasing their huge fish, they readily called in the measurements,
44 by 27 inches, our P1 skipper James Mahon, congratulated Chris Bromley and his guests for releasing this 42 pounder. Cheers of support for their success roared throughout the fleet. Later in the day Jason would yet again, hook into a tyee in the same location. This time, the powerful Chinook, hooked off the rigger, led the fishermen a mile offshore. The fish fought hard and made impressive runs for nearly an hour. The photo shooter was readily available for capturing pictures of his second released tyee.

The second day of the trip marked an unforgettable memory for guide Bryce McClaren, and guests Scott Jellous and John Plohman. The three decided to veer from the rest of the fleet and went to take their chances at Edenshaw to try their luck. Piggy hole did not disappoint, within half an hour Scott had hooked into his big one. There was no doubt in Scott’s mind he was releasing this massive fish. After final calculations of the measurements, Bryce was informed that they had just released an outstanding 58 pound Chinook. The evening would bring celebrations of champagne and toasts to the team for such a victorious release.

Peregrine Lodge anglers experienced one of the finest fishing days ever in the misty isles. Stories of the day continued late into the evening; as everyone raved about participating in netting and or releasing throughout the “one day only” catch. Hundreds of salmon were caught and/or played. An abundance of tyee hats, handshakes and smiles were shared during the award festivities for day two.

The final two days of the guest’s stay at Peregrine followed much the same exhilarating trend. Plentiful bites and fights to be had on the water and much boasting over drinks on the dock over whose fish will take the pool that evening. By far the largest catch Peregrine Lodge has seen this season, each established angler went home with an abundance of fish as tokens of their experience and stories of grandiose releases to share with family and friends when they reach home.

You’ve got plenty of line and plenty of time – See you soon.