Where does the time go? Here we are well into Summer and the first week of July. So far so good, in fact, it’s been amazing! This trip we had groups of guests visiting from the United States and Canada.
After arriving at Peregrine Lodge on the Helijet copter,the guests were first shown to their rooms, then met in the main lodge for a brief orientation to go over what to expect during their stay. They settled into a great dinner and later, drinks around the fire pit. Then it was off to bed as morning comes early at Peregrine Lodge.
The first day out on the water the guests were not disappointed. Lots of great catches were made.
It also happened to be Canada Day. What’s more Canadian than catching salmon?
Senior guide Brian has been hooking up some great Halibut from off of cape Naden this past week. This is where Mitch landed a nice 42 pounder. In between halibut, some good sized Chinook were brought in as well. A 43 lb Chinook was landed and celebrated by Georgia,the owner of Peregrine Lodge who just loves to get out on the water.
It seems like Cape Naden, Snake Rock and Parker Point were the hottest spots this trip.
Day two and the guest were getting into the routine of eat, sleep, fish,eat,sleep,fish, with the odd soak in the hot tub thrown in for good measure. Breakfast starts at 6:00 so after a hearty breakfast, boats were loaded, gear was checked and it was off to the fishing grounds again.
Day two brought in some more impressive Chinook salmon catches and a wide variety of other fish as well. Coho, lingcod and other species of Rock Fish were in the bins at weigh-in. Some guest made their limit by the end of day two and opted to go fly fishing in the local estuaries for the last day.
Taggart and his dad Lyle stayed on for another round and Lyle ended up with even more prizes for catching the biggest chinook of the day.
The third day of our shorter trips is always filled with anticipation. Guests come with their shopping lists and this is their last opportunity to check off all the items.
Most guests were able to catch their limit by the last day. All of them went home happy and with lots of fish!
As the chopper was loaded with boxes and boxes of fish bound for St.Jeans to be packaged, and guests said their final goodbyes; it seemed to us like they had just arrived. The days go by so quickly when the fishing is this hot! 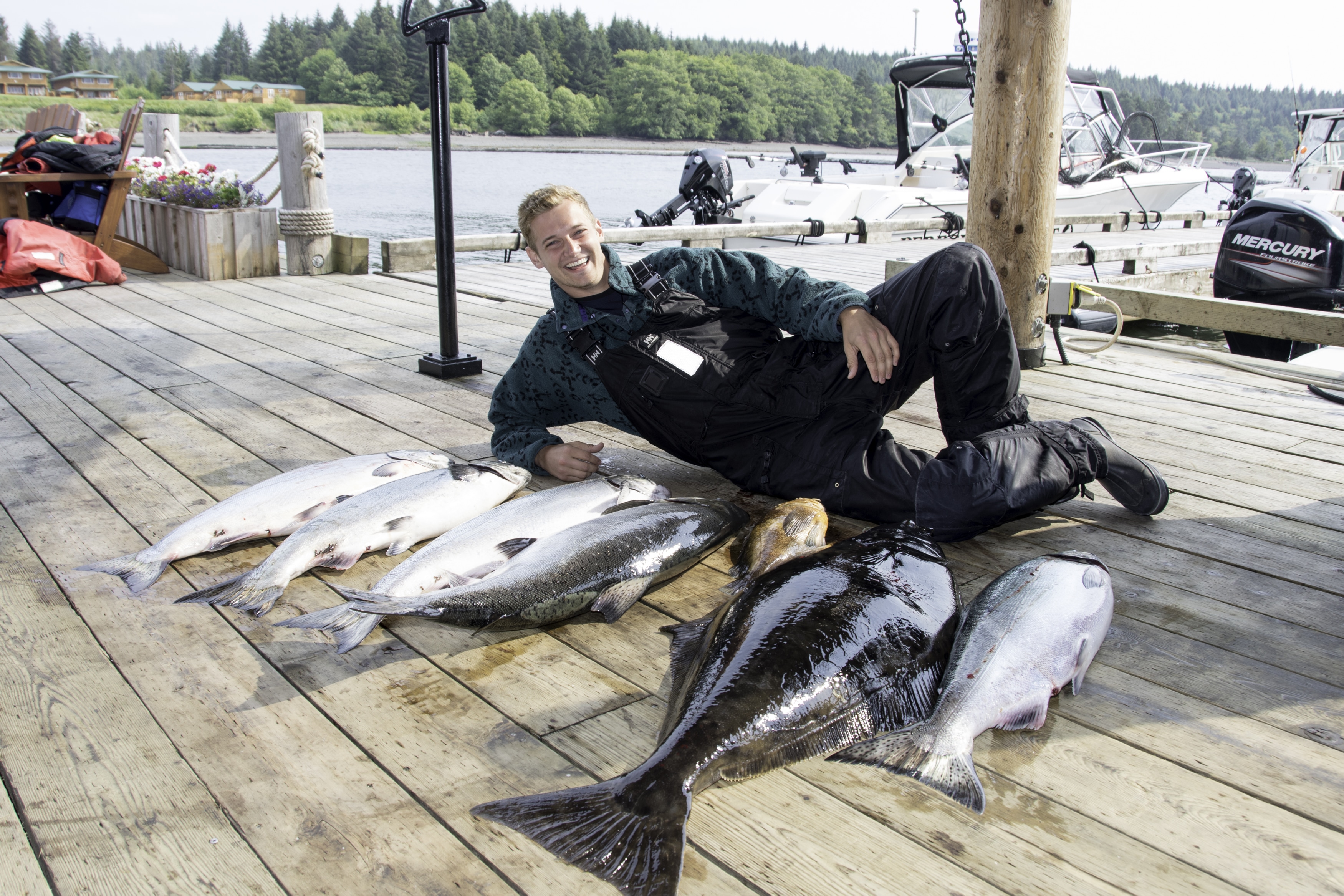 These are just a few of the fish that lucky anglers brought in this week.