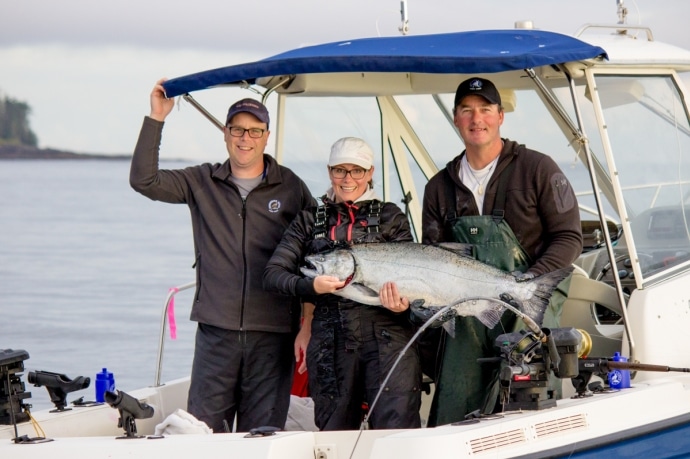 Sunshine, Smiles and Plenty of Springs

Our anglers came for the fishing, but they’re also leaving with a serious jolt of Vitamin D and a sunglass tan. The sun was shining on our magnificent fishing grounds all trip, with minimal winds and glassy waters to boot.

Cape Naden was the winner for big Chinooks, with four significant Tyees on for Day 1, as well as plenty of Springs in the early twenties and late teens for our guests to take home.

Guest Steve released a gorgeous 38-pound Chinook with guide Dan and fishing buddy Bill, who piped up later at the dock that “it was easy to release!” and a big thrill to pull in to the boat.

“We had the fish right by the boat and as we went to net it, it rolled over and spat the hooks,” said Steve. “Dan went way deep with the net and got it anyways, with no hooks.”

Long-time guest Rusty celebrated his seventeenth trip to Peregrine with a 43-pound Spring which was just one pound shy of his personal record. On the same boat with guide Cody, guest Jeff landed his first Tyee, a 30-pounder on the nose.

“It was a good fight, took twenty minutes to get in,” he mentioned later on the dock.

A snappier fight was in store for guest Robert’s 37-pound Chinook, guided by Jake Hillier that same day. “It came in quick,” said Rob at weigh-in.

For angler Gary, his 38-pound Halibut battle was as surreal and exciting an experience as any.

“It was like bringing up a door off the floor,” he described.

A hard bite on Day 2 had guest Brandi fighting for her 40-pound Chinook and first hog ever at Snake Rock with guide Max.

“Oh, he fought!” Brandi said later of the incredible salmon. “I almost couldn’t get the rod out of the rod holder because there was so much tension when he took off. It just kept going and going; it bit hard.”

While lady luck was at play, birthday luck was also working its magic for guest Brad and his guide Scott, whose birthday it was on Day 2. Brad brought in a 50-pound Halibut at Eden Shaw, calling it the biggest Hali he’d ever caught.

The wildlife sightings throughout the trip were remarkable; a peregrine falcon was seen flying over the fishing grounds on Day 1, while a pod of orcas rolled through Green Point and Klash on Day 2 before heading offshore.

Day 3 came fast and the sunshine kept on shining. Brandi’s partner Karl got to join her in the Tyee Club with his first Tyee ever, guided by Sam H. at Parker Point. The 33-pound beauty was released so for it to live and grow so that future anglers can enjoy the power and excitement of a Chinook battle in Haida Gwaii.

There are more spectacular days to come.

Here’s to big bites and epic fights – talk to you soon!