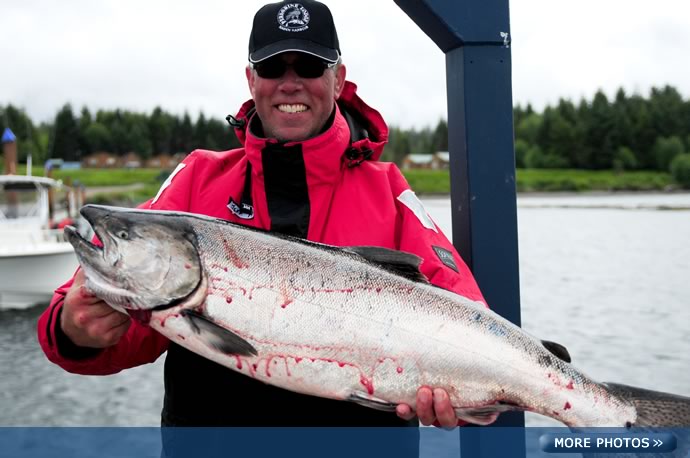 As the sun rose on June 27th, a new group of guests headed out on the water, excited and eager to get in on what has been an incredible start to the season. It was another beautiful day out on the water, leaving our guides shaking their heads with disbelief as they yet again shed their rain gear in favour of sunglasses and sunscreen. It was flat calm, and it was a spectacular sight to see the fleet departing in formation from the dock.

It was not long at all before the guides and guests both realised that the plentiful runs of Chinook and Coho that have been passing through our fishing grounds were far from slowing down. In fact, it seemed to be heating up, with fish being reeled in at a feverish pace, with every boat hooking up almost simultaneously. The top fish of day one went to Neil Pilsner, who caught a beautiful 32 pound Tyee in dramatic fashion. Fishing off Green Point with Cory as their guide, his fishing partner Andrew Brochu hooked into an aggressive 20 pounder. Just as Neil was starting to reel his rod in to make way for Andrew, he hooked into his Tyee, leading to some incredible double-header action. The 32-pounder was also a fighter, but having already set all of his bait himself, Neil was able to fight him single handily, bringing him into the boat after an incredible breathtaking fight that lasted over 40 minutes!! Before the day was done, Neil and Andrew were able to both boat their full daily retention limit for Chinook and Halibut, while also catching 3 Cohos between the two of them to start things off in incredible fashion.

Day 2 saw similar good luck for Neil and Andrew, who had reached their maximum for the trip before lunch, and were happy to release 10 fish over the course of the day. With seldom an opportunity to even get all of their lines in the water before getting bites, it was one of the busiest days their guide had ever seen! However, they were not the only ones to have success. Cecil Smith, under the experienced guidance of Butch, was able to land a beautiful 28 pound spring just off of Parker Point. Fishing at about 25 feet on a weighted rod, the fish took the cut-plug herring bait and ran with it. It was well over a half hour later that Cecil was able to finally hold the fish up for a triumphant photo!

Things did not cool off on the third morning, and by the time the guests rolled triumphantly back into our dock, every single guest had reached their limit for Chinooks! Furthermore, all but a few guests reached their limit in Cohos, which were once again abundant. After such a haul of fish, there were many sore backs, which our talented masseuse Julie was more than willing to take care of. There was no pain visible in their faces however, as every guests left with an ear to ear smile, which for us, the staff of Peregrine Lodge, is the biggest reward we can hope for!