Our third trip of the season has already come and gone. Where does the time go?
Our group was full of returning guests and a few newcomers. Our fishing guides had their work cut out for them this trip but once again they proved they were up to the challenge. A delayed arrival was caused by fog rolling into the area and as day one was postponed the guests were as eager as ever to get their fishing adventure started.

The weather cleared up for Day 1 on the water. This allowed our guests to experience the best of the Dixon Entrance west north-westerly fishing conditions. The rolling seas forfeited the Spring, Chinook, Cod, and Halibut that were caught and processed at the lodge.  The busy guides were led by Ryan who guided Lauren to the catch of the day. Her Spring did not give up without a good fight. Lauren was exhausted after Ryan netted the big Salmon and with her husband by her side she proved why Kelly proclaimed, “she is the provider”.

Day 2 started early so the group and staff could catch up on missed time on the water. The morning cloudy conditions and misty coastline seemed to be ideal conditions for halibut fishing on Halibut Hill and Salmon fishing off of Cape Edenshaw and Cape Naden. Before noon Joseph had his winning catch of the day. Mikey’s skillful pilotage and watermanship steered his guest to a rewarding adventure.

Day 3 was incredibly calm on the water. The seas were glassy and again the offshore halibut grounds were a favorite spot for our guides. Guide Dave had secured Halibut for his guests but his patience paid off as the catch of the day came at day’s end. After coming in from being offshore most of the day Halibut fishing Dave guided the Trophy Sportfishing boat in and around the waters of Cape Naden. His decision paid dividends and Mark was able to catch the fish he came all the way from Florida to get. A couple double headers were had to close out the day. After, guide Max landed a double header his guests Rob and Linda achieved their maximum allowable Salmon for the trip they then headed to Halibut Hill to end their productive day.

A calm ocean and southeasterly wind blew in on day 4 and the water was glassy. Our guides found the coastal and offshore fishing to be ideal for Coho, Chinook, Halibut, and Cod. Many guests tubbed out on their allowable catches by mid morning. In the afternoon guide Johnny and guests were catching and releasing Chinook and Coho. Mike caught the biggest Salmon of the day just as the afternoon high tide was flooding. Mike caught the biggest Chinook of the trip early in the afternoon. Our senior guide Steve was busy as the biggest Salmon netted and boated was followed by two more Coho, one which 5 year old Ella claimed for herself and her family. As they returned to Peregrine Lodge for the weigh in Courtney said, “we killed it out there today”. A phrase we love to hear from our guests. 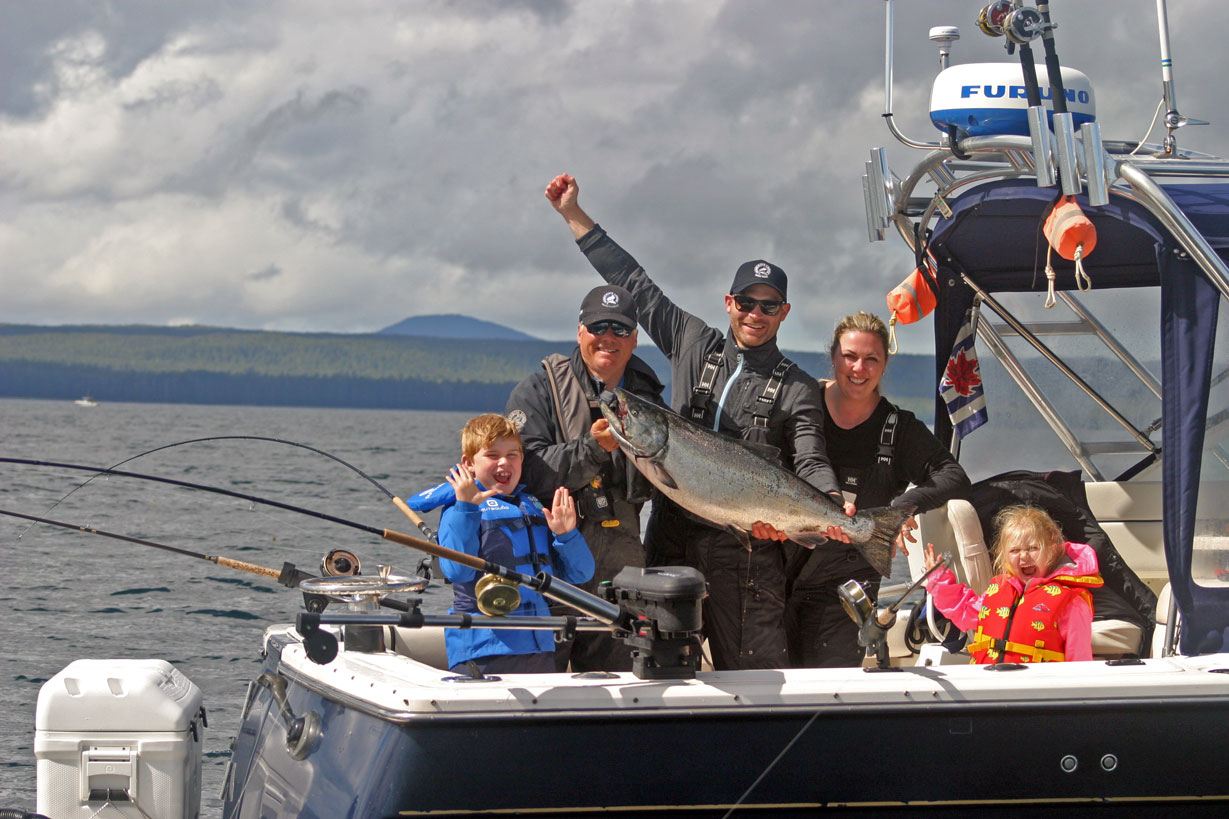