Peregrine Lodge is located in Naden Harbour, Haida Gwaii. The opening to Naden Harbour sits at the crossroads of the migration routes of millions of salmon as they return to spawn in the rivers and streams across the province. Haida Gwaii receives the highest concentration of salmon passing through its waters. The fishing grounds of Peregrine Lodge are well positioned to take advantage of these magnificent runs. Haida Gwaii is also rich in several other fish species, below you will find a complete list of fish available to catch while at Peregrine Lodge. 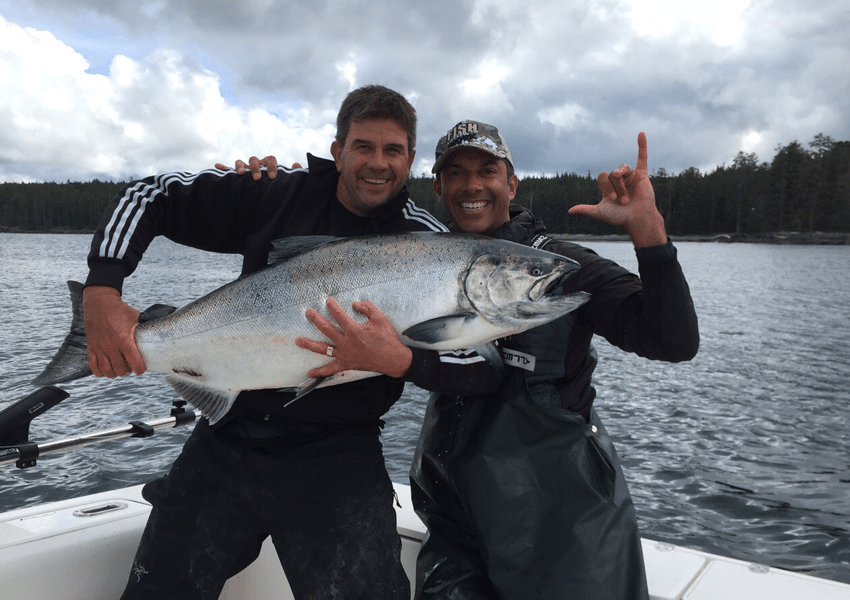 Also known as the king or spring salmon due to their big size. They are distinguished by its spotted blue-green back, silver tail dotted with black spots and black gums. With it’s highest oil content of all Pacific salmon, they are often rated as the best-tasting salmon.

Our fishing grounds are located in the path of mature salmon as they travel to spawning rivers along the Pacific coast. The rivers are abundant with salmon over 30 pounds; salmon that are over 50 pounds are also regularly caught by our guests. They’ll never fail to provide the angler with a challenging battle!

Known for its deliciously rich meat and for being one of the most prized salmon in B.C., Coho salmon weigh an average of 6 to 14 pounds. They are silver in colour when they enter the river but change to red and purple colours as they mature and approach spawning time. They are known for their moody and aggressive behavior and provide a great challenge for anglers.

Averaging 4 to 6 pounds, the Pink salmon is the smallest of the BC salmon species. Their runs are overwhelmingly large and provide anglers with a consistent and sport fishery.

They return to our rivers every 2 years on the odd year. Although they are an aggressive fish, they are the easiest to catch out of all the BC salmon species and provide amazing fly-fishing opportunities for a beginner or seasoned anglers.

Chum is a Pacific salmon, and may also be known as dog salmon or keta salmon, and is often marketed under the name silverbrite salmon. The body of the chum salmon is deeper than most salmonid species. In common with other species found in the Pacific, the anal fin has 12 to 20 rays, compared with a maximum of 12 in European species. Chum have an ocean colouration of silvery blue-green with some indistinct spotting in a darker shade and a rather paler belly. When they move into the fresh water the colour changes to dark olive green and the belly colour deepens.

The Sockeye are also called red salmon, kokanee salmon, or blueback salmon, is an anadromous species of salmon found in the Northern Pacific Ocean and rivers discharging into it. This species is a Pacific salmon that is primarily red in hue during spawning. They can grow up to 84 cm (2 ft 9 in) in length and weigh 2.3 to 7 kg (5.1–15.4 lb). Juveniles remain in fresh water until they are ready to migrate to the ocean, over distances of up to 1,600 km (990 mi).

The northern waters are famous for halibut that can grow to more than 400 pounds. Halibut that are 10 to 50 pounds are more common though. They spend most of their time near the ocean floor but move back and forth between the depths of water to pursue bait fish.

They are flat and a diamond shape with a white underbelly and eyes on their upper side. Pacific Halibut provide a mild and sweet taste, with a firm texture and relatively few bones. Halibut cheeks are highly prized for their sweet taste.

Lingcod can reach sizes as large 60 inches and weigh up to 130 pounds. Around 20% of lingcod have blue-green to turquoise flesh. The lingcod is a popular eating fish and is thus prized by anglers.

Rock cod are yellow-grey to red-brown with white fin margins. They may grow up to 50 cm in length. They are frequently found inshore and inhabit shallow waters in the continental shelf with a typical depth of 10 to 90 m.

Yelloweye rockfish is one of the world’s longest-lived fish species and is cited to live to a maximum of 114 to 120 years of age. As they grow older, they change in colour, from reddish in youth, to bright orange in adulthood, to pale yellow in old age. Yelloweye live in rocky areas and feed on small fish and other rockfish.

Coastal Cutthroat trout usually have a distinctive red or orange streak under their lower jaw. This may not be obvious on those found in salt water. Coastal Cutthroat differ from all other trout by having many spots all over the sides of the body, on the head and often on the belly and fins.

Dolly Varden trout have a dark blue or olive-green back, silvery sides, and a white belly with spots around their body. Dolly Varden are an aggressive fish and strong fighters. They can live up to eight years.