The group for the 3oth Anniversary trip from July 18-22 was full of family and friends of Peregrine Lodge ownership. The atmosphere around lodge had a homie feeling and everybody was treated like royalty by our kitchen and staff. So many compliments on the food was awarded to the chefs and to the hospitality staff. As they took to the water, our guide staff were more than ready to show off their Salmon and Halibut fishing skills to the returning fishing enthusiasts and to the first time folks.

The temperature reached 16 degrees on day 1 and the skies were partly cloudy. The waves were less than 1 meter with west-north westerly winds 12-14 knots. Dave guided Mike on a Trophy to the fishing grounds of Cape Naden and to the Catch Of The Day, a 26 pound Chinook. Mike decided to catch and release. The moment was captured on camera as the guys mood on the boat was measurably high spirited as their pride for their deed was obviously a great sportfishing emotion. Jake guided Ed and Brit on a Edgewater boat and landed Ed a 24 pound Chinook. Ed also caught one other Chinook and kept both of them as did Brit with his two Chinook he caught. The biggest weighing in at 20 pounds. Brian guided Jeff on a Pursuit boat to a 21 pound Chinook, 2 Coho and a Halibut. Jeff was happy to take his fish home too.

A low pressure system moved in on day 2 bringing with it 1.5 meter seas and west-north westerly winds 18 knots with gusts to 23. It was mostly cloudy, but no one was deterred from the task at hand. Brian guided Jeff on a Pursuit boat to the Catch Of The Day which was a 27 pound Chinook. Jeff kept it, one other Chinook, one Coho and one Halibut. John caught his 24 pound Chinook and a Halibut with Guide Max on a Montauk boat. John’s big Chinook was caught east of Cape Naden in the calmer waters protected by the cape. Scott and Peter both caught 22 pound Chinook Salmon. Scott fished with his Guide Greg from a Trophy boat and kept his Chinook. Peter was with Jorgen on a Pursuit boat and landed his 22 pounder and one other Chinook along the Kelp garden off of Parker Point. Jorgen then took Peter offshore and pounded bottom to catch a Halibut as well.

On day 3 the weather persisted and as the Peregrine Fleet exited naden harbour the wind was 19 to 23 knots and the seas 1.6 meters. The ocean temperature dropped to 11 degrees from 12 on day 2. This seemed to have an affect on the Halibut as they were being caught inshore making everyone happy that they could catch Salmon and Halibut near the shore. The biggest Chinook of the trip was caught by Mary being guided by Cody. While drifting from Klashwun east to Snake Rock Mary got into a 43 pound Chinook that fought for 45 minutes before showing itself at the surface. The skilled teamwork led by Cody paid off as Cody netted the Tyee, measured it onboard and Mary decided to release it. They knew they most likely had the Catch Of The Day, and they did. Peter and Guide Jorgen caught and kept a 27 pound Chinook. Peter also kept his Halibut that he caught as well. Graham was also guided by Cody and caught a 20 pound Chinook and a 10 pound Coho after being eyewitness to the induction of his fishing partner to the Tyee Club. Aaron fished with Guide Max and caught a 25 pound Chinook which he kept and a Halibut to boot.

As the morning of the last day beagan the fleet was wise to weather. Wind and seas were much the same on day 4. The ocean water temperature had rose back to 12 degrees and the air temperature made it to 18 degrees. The Catch Of The Day was made by Aaron and guided by Jake. They fished the day at and around Cape Naden where they landed the winning 25 pound Chinook and a Coho. Ed and his Guide Mike caught two Chinook the biggest weighing 24 pounds. Paul caught two Chinook and a Halibut. Paul’s big Chinook was 23 pounds. He and Ed both took home their fish. Ethan came in with a 20 pound Chinook to take home along with one other Chinook caught on day 3 and a Coho and Halibut from day 1.

It was a pleasure serving the family and friends of the lodge. We are so fortunate to have shared the 30th anniversary with longtime Peregrine Lodge guests and with the first time visitors among the group of this trip. This special place in Haida Gwaii is forever kept in the mind of the adventurous ones who take the journey to Haida Gwaii knowing that when they get here they will be well cared for. Surely the Peregrine Lodge Fishing Adventures are taken to heart and their stories taken back home accompanied by the fresh fish. 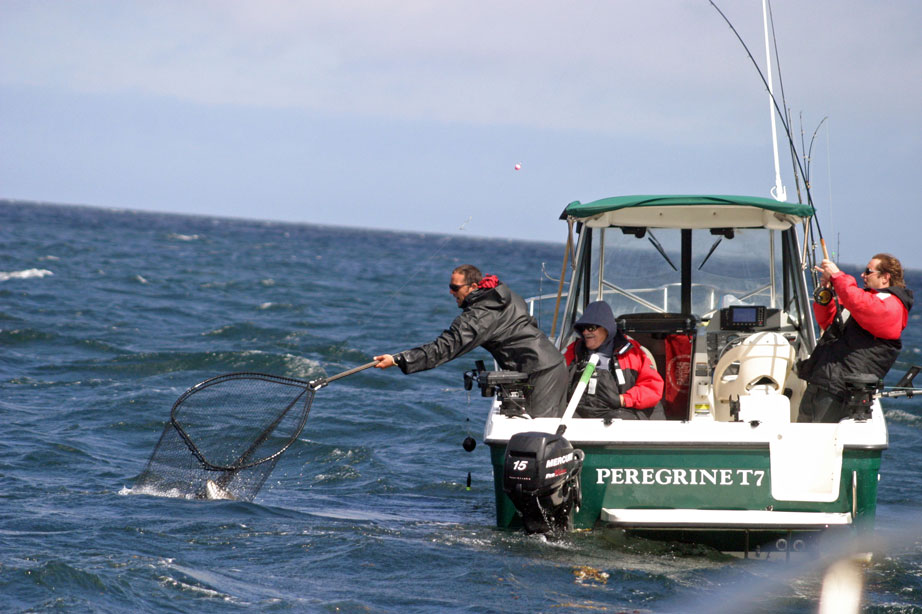 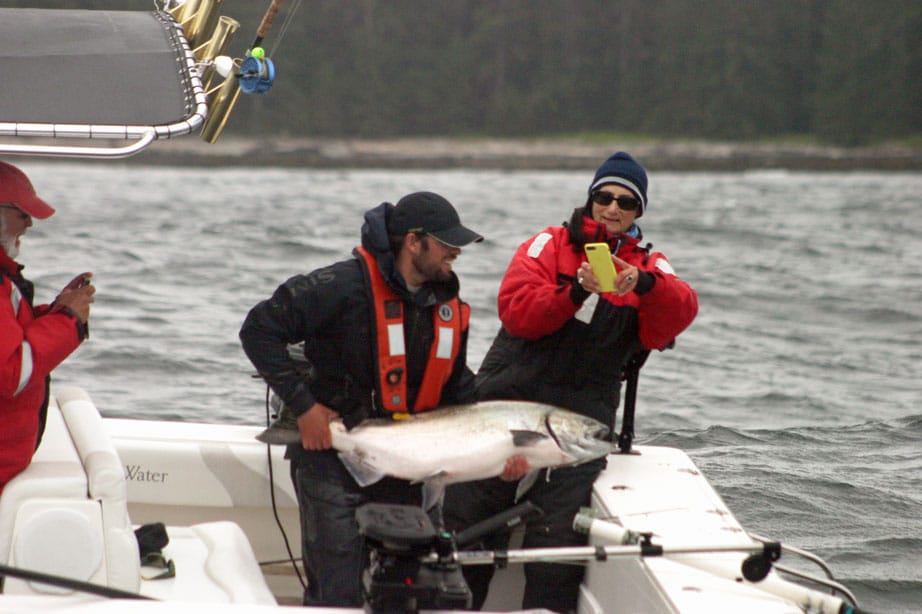