Like the origins of our guests for this trip, widely varying, the weather for this 4 day trip was too. The sunshine on day 2 was mixed with the liquid form of sunshine on day 1 and day 4. Calm days mixed with winds reaching 18 knots were the norm for this four day trip. Guests came from England, Ireland, USA, Canada and Brazil to partake in the best sportfishing in the north. Six guests; Dan, Paige, Preston, Dale, Michelle and Derek all caught and retained their maximum allowable Salmon.

This was the first trip to Peregrine Lodge for Chris who came sportfishing from Florida with his son Shaun. Chris and Shaun were guided by Dave J, Craig B and Craig A on Trophy boats. Chris caught a 20 pound Chinook on day 3. In total, Chris caught and retained four Coho Salmon, two Chinook Salmon, one Chum Salmon and two Halibut this trip. Shaun caught and retained his three Coho, two Halibut and a Cod.

Jon, Keith and Layne came sportfishing from Alberta. They fished from Edgewater boats with guides Cody, Max and Greg . On day 1 Jon caught and kept a 20 pound Chinook and on day 2 he caught and kept a 21 pounder guided on both days by Cody. Layne shared the prize winning catch of the day on day 4 guided by Greg with a 28 pound Chinook that he kept. Thank you to Jon, Keith and Layne for spending quality family time with us here in the Haida Gwaii we will be honoured to see you here again as soon as possible.

Tom and his son John came from New Jersey and enjoyed an awesome reunion with friends who came here from around the world to fish. They fished from Trophy boats guided by Butcher, Jorgen and Craig A. John caught a 21 pound Chinook on day 3 guided by Jorgen. Tom and John each caught a Halibut and John landed a Sole which were all kept.

Luiz spent his third trip to Peregrine with his son Luca, his nephews from Brazil, and Tom and John from New Jersey. Luiz and Luca hailed from England to sportfish as much as possible. Luca caught all his allotted Salmon, maxing out on his allowed Chinook and Coho. Luca also caught two Halibut. Luiz caught a 20 and 21 pound Chinook on day 2 guided by Steve. We sure will like to see a fourth return trip, and we hope you can get everyone to come back with you.

Brothers, Riccardo and Alessandro were on their first trip to the lodge and came from Brazil. They were guided by Jorgen, Kai and Dave W on Pursuit and Trophy boats. On day 2 Riccardo caught a 20 pound Chinook guided by Kai. They caught six Chinook, eight Coho and three Halibut total to take south to Brazil.

Terry is from Alberta and was here on his eighth trip to Peregrine Lodge. Terry was here with Toby, Brian, Nicole, Rob, Marcy, Dale, Michelle, Dalton and Sheri. They were guided by Brian, Max, Jake, Kai, Mike O and Mike C on Pursuit, Edgewater and B5 boats. On day 1 Dalton caught a 23 pound Chinook that he kept to take home. On day 2 Nicole, Marcy and Sheri caught and retained a 22, 23 and 21 pound Chinook respectively. Nicole and Marcy were guided by Brian and Sheri was guided Max. On day 3 Brian caught a 24 pound Chinook guided by Jake. On day 4 Dale caught and took home his 21 pound Chinook guided by Brian. Both Dale and Michelle caught their limit of eight Salmon. Dale also kept his two Halibut and Michelle kept her one Halibut as well.

This was another great trip shared with amazing people from all over the world. Peregrine Lodge is grateful to everyone for coming and sharing our great fishing environment. It is truly an adventure and we have to remember to respect our surroundings so that we can continue to be proud hosts to all you amazing individuals and groups in the future. From all of us at Peregrine Lodge Fishing Adventures, keep the rod tip up and let it run! 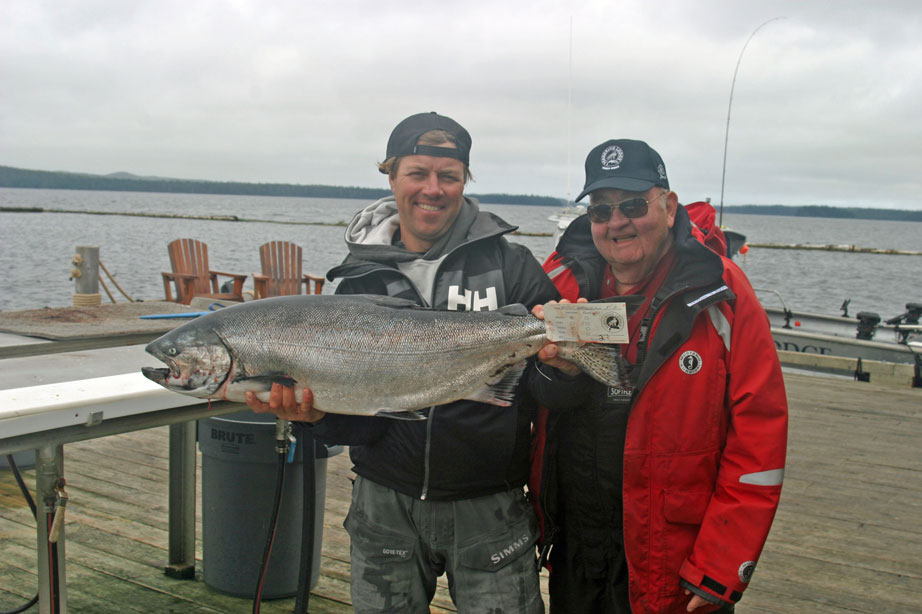 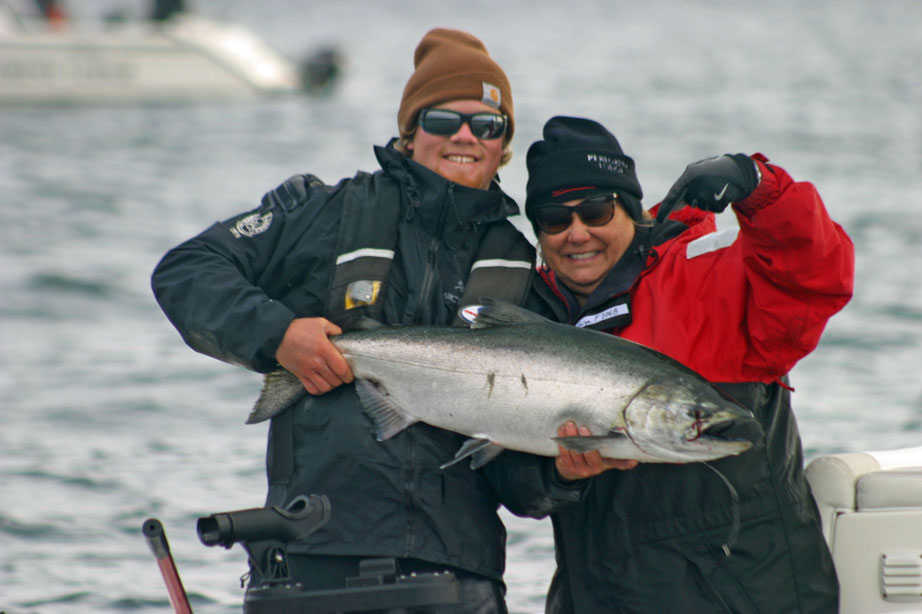 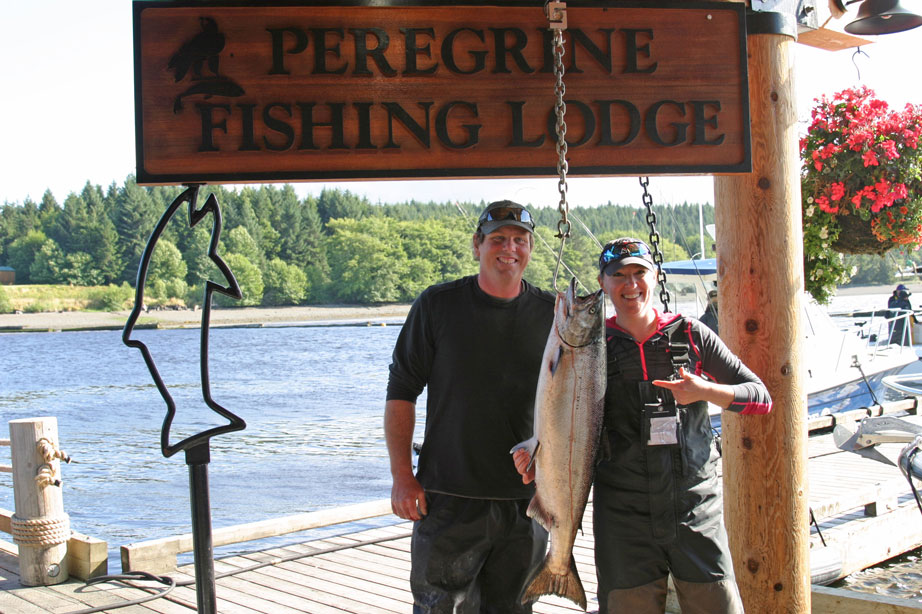 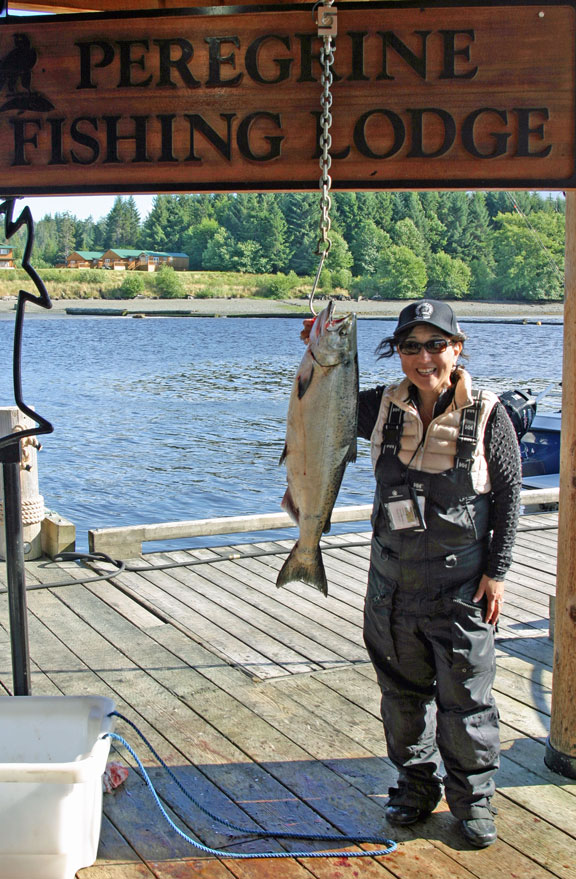