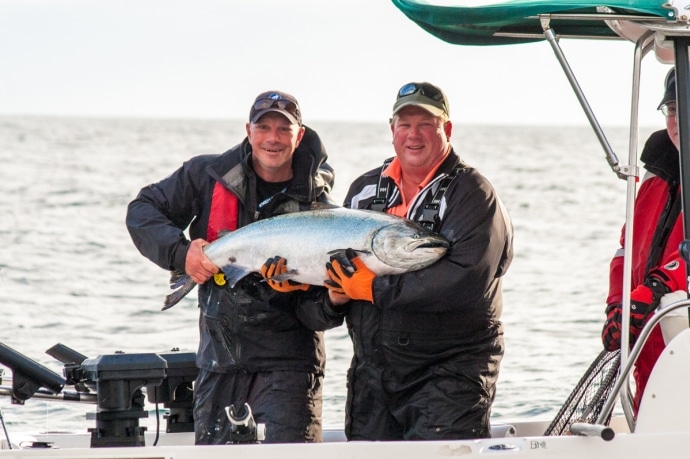 There were tears of joy today. Guide Jorgen admitted to shedding more than a few when angler Alan pulled in a 60-pound Chinook at Parker Point, marking the largest fish landed so far for the Peregrine Lodge season.

“I mean, this is what we try to go out and do every day,” said Jorgen. “This is our goal every day.”

Alan was equally floored. “Wow, amazing,” he said. “This is a once in a lifetime fish!”

It was that exhilarating sense of witness to incredible acts of nature which defined this happy trip of guests. Translation: there were a lot of huge fish.

With patchy fog, shocks of lightning and pods of orca crossing paths with humpback whales, Day 1 was mystic in weather and tales on the water.

Coho were plentiful and at a good size, while the Springs were epic, including a 45-pound beauty landed by angler Morris at Cape Naden with guide Tyler at his side.

Guests John M. and Melissa were treated to a memorable day on the water with a 32-pound Chinook played by John and guided by Butcher at Snake Rock.

“It’s an honour and a pleasure to come up here and experience this,” said John at weigh-in.

“It’s a double honour and pleasure to catch my first Tyee!”

Welcome to the club, John! And also welcome to angler Scott, who hooked into a 30-pound Spring with guide Jake Henderson. These are the fish we tell stories about for all our lives.

Day 2 presented wind, but no deterrent for our hearty anglers. Brothers-in-law Scott and Dominic shared some incredible Spring action with a 37-pound and 36-pound back to back between the two of them.

“Couldn’t have done it without the captain,” said Scott later on, pointing to guide Jake Henderson.

“I thought I had the prize pool today, especially the family bet, but then with ten minutes left in the day Scott gets one a pound bigger than mine,” said Dominic.

“I was happy for him though, very happy!”

The friendly family competition was also firing up over at Snake Rock, where return guest Craig pulled a 33-pound Chinook into the boat with his wife Katie and her father Ron and brother Patrick.

Another Tyee for the books was landed by guest Robby with fishing partner Ian and guide Mike C. there to cheer him on at Bird Rock. The big ones were cross-grounds this trip, which was good news for our guests who were able to quickly fill their limits on salmon and enjoy steady bites throughout their day.

No steadier success was found than on Day 3, when return guests from Utah Kevin and Tyler got into five Tyees between them with guide Dan at Cape Naden, including a 44-pound giant which was released to its waters by Tyler.

And to think he almost missed it: Tyler had been feeling sick and was brought out later in the day on our support boat with photographer Dolf. As the two neared Dan and Kevin, they heard the guys had two Tyee on and saw them hook into another.

Craig was back at it again on Day 3 with guide Butcher and family on board at Parker Point, where he landed a thrilling 52-pound Spring.

And over at Cape Naden, guest Kathryn was getting into a 43-pound Chinook with guide Mike O.; it was a bite with perfect timing.

“I told Mike that we wanted to go back to the lodge in fifteen minutes, and then – boom – just like that, it bit!”

It goes to show that you never know what’s out there. And isn’t that just how it should be?

Day 4 produced the epic 60-pounder, as well as a monster hog at 41-pounds by guest Scott, landed at Snake Rock. That’s three for three for Scott this trip.

Coming in close to the forty mark on Day 4 was a 39-pound Chinook played at Naden Harbour by angler Robert G., guided by Jake Hillier.

These are the fish of a lifetime. What does tomorrow have in store for our new guests?

Here’s to big bites and epic fights – Talk to you soon!